Bhatner Fort is a famous fort located in Hanumangarh, Rajasthan. Bhatner Fort, built in 295, is one of the ancient forts in the state of Rajasthan. That fort is believed to be about 1700 years old. This famous fort was built by King Bhupat. Raja Bhupat was the son of Raja Bhati, the ruler of Jaisalmer, so he named this fort after his father-in-law, Raja Bhati. Let us tell you that the fort is built in the middle of a forest near the Ghaggar river.

The history of Bhatner fort is about 1700 years old. Because the fort of Bhatner was built by King Bhupat in 295. Raja Bhupat had lost a battle with the Sultan of Ghazni. That’s why he was in search of a safe haven. Raja Bhupat was the son of Raja Bhati, the ruler of Jaisalmer. For that reason, he named the fort after his father’s name, Raja Bhati. The Hanumangarh Fort was rebuilt in the 14th century by Sher Shah Suri.

He was strengthening the pillars of the fort. And worked on a strong defense system. Let us tell you that Hanumangarh Fort was occupied by various rulers for years. But the last emperor who captured the fort. He was Emperor Sorat Singh, the ruler of Bikaner. Because he had captured the fort on Tuesday. And the day is considered as the day of Lord Hanuman, hence the name of this city is Hanumangarh.

The best time to visit Bhatner Fort and all the tourist places around Hanumangarh is considered to be the winter season. Because in the summer season there is very strong heat in the state of Rajasthan. Because of that the temperature here remains very high. Which this season is not suitable for travel to tourist places. That is why November to March is the best time to visit Hanumangarh Fort.

Talking about the opening and closing hours of Bhatner Fort Hanumangarh, the Hanumangarh Fort is open daily from 9 am to 6 pm for the tourists to visit. Tourists can come here very easily during that time. Tell the travelers visiting Bhatner Fort that there is no fee for the entry and visit of tourists in Bhatner Fort. Here you can easily move around without paying any fee.

Traveling here during the summer season should be avoided.

Because Hanumangarh is located in the desert region of Rajasthan.

Because of that, it gets scorching heat here in summers.

Private taxis or cabs are a good option for traveling here.

Because guides try to charge you more money by giving services.

Hanumangarh Fort is one of the oldest forts in India. It was constructed in ancient times from brick and clay. But in the 14th century, Sher Shah Suri started the reconstruction of this ancient fort. Because of that many changes were made in it. This grand fort has strong massive walls with large round bastions at regular intervals and many grand gates.

Temples of many gods including Lord Hanuman ji and Lord Bhole Nath Shiva ji are located in the ancient fort. It has an old building named ‘Jain Pasara’. And 3 ancient idols with inscriptions are located inside the fort. The tomb of Sher Khan is also seen in it. Let me tell you that he was the governor of the fort. Apart from these, 52 kunds are also seen inside this fort for storing rain water. He is present now. 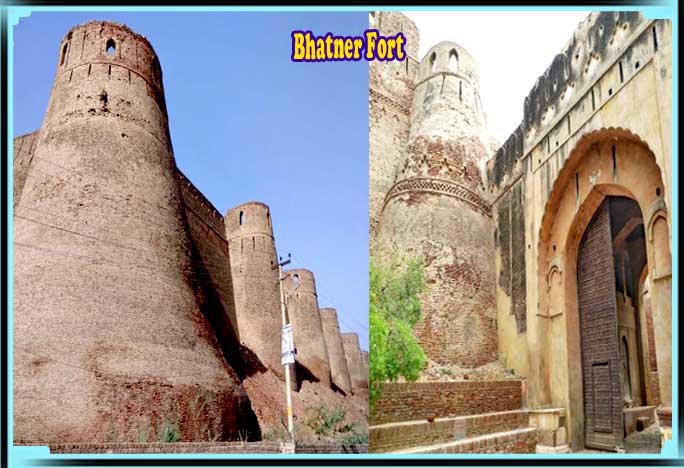 Places To Visit Around Bhatner Fort

How To Reach Bhatner Fort Hanumangarh

From Akbar to Prithviraj Chauhan, many kings kept the Hanumangarh Fort under their control.

This fort stands for almost 1800 years of history.

In 1805, Raja Surat Singh of Bikaner took possession of the fort.

This fort is built in the middle of a forest near the Ghaggar river.

Hanumangarh Fort is an ancient site located in Hanumangarh, Rajasthan.

This fort has also been a witness to many important events of Indian history.

Due to being surrounded by the desert fort of Bhatner, it is kept in the category of Dhanwan fort.

Q .Who built the Bhatner fort?

The King Bhupat of Bhati Dynasty

Q .Which is oldest fort in India?

Q .Why is Hanumangarh famous?

Hanumangarh is a city best known for its temples and its historical significance given that it was once part of the Indus Valley Civilization.

Q .How many Hanumangarh are there in India?

Hanumangarh is a city in the Indian state of Rajasthan.

Q .What is hanumangarh PIN code?

Q .What is the pin code of Hanumangarh Junction?

, Thank you for visiting the site!
If you liked this post, do share it with your friends!